During last few months, while being locked at home due to COVID, I thought of using my free time to build something useful. So I built an App to help my wife manage her Recipes (which she has been complaining that she is having hard time managing). While I built the app it was a great learning curve for me where I learnt a few new things and got a chance to apply them to my app. Particularly I learnt a lot building the whole architecture for the app including the front end and the backend. If you want to view a preview of the app, watch these videos:

In this post I will be going through the architecture which I built for my app and currently the app is deployed with this Architecture. Hope this helps you understand a basic microservice Architecture design for a full stack app.

Since this is a theoretical post, I don’t have any codebase to share with this. You can follow through the process to deploy your own full stack architecture. If you need any help, contact me and I can give some directions for that. If you want an access to the app to play around, please let me know and I will create an user.

In this post I will be going through the overall setup of my app and how I deployed the same. Mostly this will be a theoretical post but I will be posting needed scripts wherever appropriate. I will be covering two versions of the architecture which I built:

Both of these will give you a good basic understanding of a full stack architecture involving React and Flask API. I am still evolving the architecture to make it more available and fault tolerant so the architecture I define here is the current state. I will try to update the post too as I update my actual component architecture.

I wont be going into much practical scripting or to-do steps in this post, but to have a good understanding of the content described in this post its good if you have the below pre-reqs. Not mandatory but good to have:

I will try to explain all the components in detail so its easy to understand how I have setup my app.

Before I go into the architecture, let me describe what the app is about and what it does. The app is a Recipe manager which helps an user manage his/her recipe list and get the needed recipe easily through the search. To have a better understanding about the app, I have divided it in two sections. One section described the functional part of the app and another part described the technical part of it. 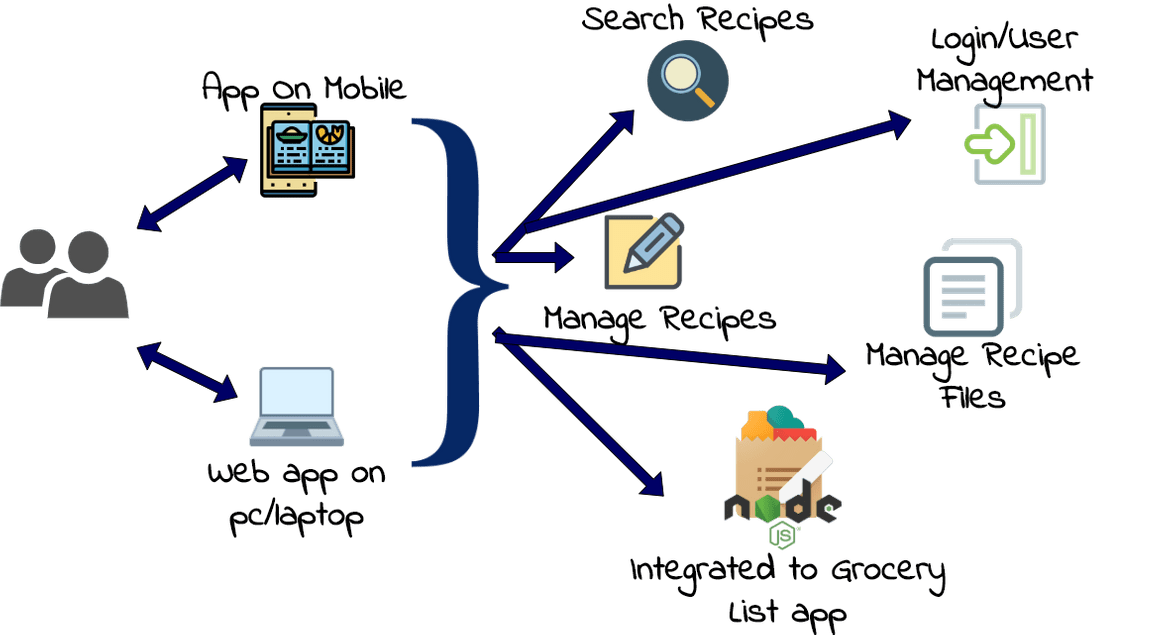 Above image should describe what the app does.

There are two versions for the app. It can be opened on a pc/laptop as a web app. It is also designed as a PWA( Progressive Web app) which enables the app to be installed as a mobile application on Android phones(IOS is not supported yet). Both modes have different looking UI suiting the respective devices.

User is able to perform a keyword search and the app shows a list of Recipes which contain that keyword in the name. By default when user logs in to the app, it lands on a Search page. From there user can either perform a blank search to show all of his/her recipes or perform a keyword search. The search only searches on Recipes which the logged in user has created. So it has the access boundary and doesn’t show Recipes across users.

User can upload a recipe file or document too to the app to serve as a document store for the recipe file. The app provides a capability where user can select and upload a local file while creating a recipe. The file can be anything, from a text file to an image file. The app stores it in a File server an serves it back to the user via a CDN.

Integrated to another App

This app is inherently integrated to one of my other app which lists and tracks a grocery list. So an user can directly add the ingredients needed for a specific recipe, to a Grocery List, which will add it to the Grocery list app as an item to be shopped. User needs to be provided access to both of the apps.

Lets go through each component:

The Front end for the app is built on React framework. All operations and communications with backend are performed via various REST API endpoints. The frontend is built to behave as PWA so it can be installed on Android phones as an app. Depending on whether the app is opened on a pc/laptop or a mobile phone, different frontend UI us presented to the user.

Backend for the app is built as a REST API. It provides various API endpoints to perform various functions like adding recipe, deleting recipe etc. The REST API is built using Flask. The API endpoints perform all operations of connecting with the DB, Authenticating, Searching etc. CORS is enabled for the API so it only accepts requests from the React frontend.

App Data: For the Database to store all Recipe and user related data, I am using PostgresSQL database. The Flask API backend will be performing all DB operations connecting to the DB and getting requests from the frontend. There is also a cache deployed in front of the DB to cache queries and offload from the DB. There is also a backup DB deployed which stores a copy of the data from the primary DB. The data replication runs every 5-6 hours to have a backup of the data. Anytime there is an issue with the primary DB, the DB DNS can be switched in the Flask API backend so the backend connects to the backup DB and continue working.
Auth Data: There is also another DB involved to store the user session data. When an user logs in and a session is established with the app, the session token and related data is stored in a Redis data store. This data makes the session of the user persistent in the system they are opening the app on. For e.g if the app is opened as a PWA on a phone, once user logs in, the session data is stored in the Redis database. Any time user closes and reopens the app, the app verifies the session connecting to the Redis database using API.

To enable the search functionality in the app, an Elasticsearch service is also deployed. This stores just the name and related user for the recipes. There is just one index created for the Recipes. Anytime user searches a recipe on the app, the search is performed on the Elasticsearch instance via the Flask API to return the Recipe ID. Using the ID, rest of the details are fetched from the Postgres DB when user clicks on a Recipe to get to the detail page.

For the authentication, I have built my own auth mechanism for this which authenticates the user before every call to the Flask API backend from the frontend. As I explained above, once authenticated, the session data is stored on a Redis database for a re-verification when user reopens the app. The password for the user is stored in hashed form in the DB. At a high level the authentication flow for any action in the app is below:

To support the file storage capability of the app, there is a separate File service deployed to handle the File related operations from the app. The files are served back to the user through the app using a CDN (Content Delivery Network). The CDN makes serving the static files faster and users can access/download them faster and easier. The file service itself is a Nodejs API using Express. It provides endpoints for various file operations like upload file, delete file etc. The frontend calls the file service endpoints to perform the file related operations when an user works with files like images on the recipe. The API stores the files to a Google drive storage create for the file storage. The CDN serves the files to the frontend from this Google drive storage.

Now that we have some info about the various components/services involved in the app, lets move on to how to place and connect these various components to get the final working app. I will describe two versions of the architecture. In one version, I will be showing an actual deployable architecture which can be used to deploy other similar apps too in a production environment. This will be an ideal production ready architecture. In another version, I will describe the actual version I used to deploy my app using free resources. Since its just a side project of mine, I have deployed the app using as much as free resources as possible. This info can help you stand up your own side project architecture too with minimal costs.

Lets get on with it.

In this version of the architecture, I will describe a proper Production scenario deployment (when its not your side project). I will design this architecture in two ways:

Deployed on Servers
Below image should give an idea about this deployment architecture. Each of the component is deployed as a Kubernetes deployment. 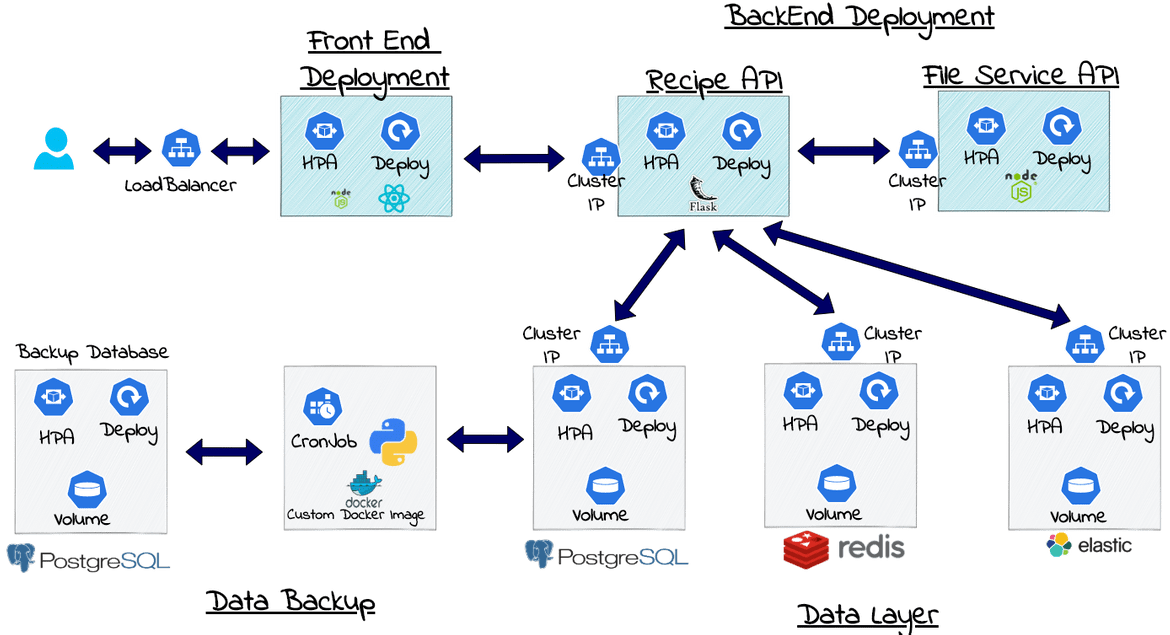 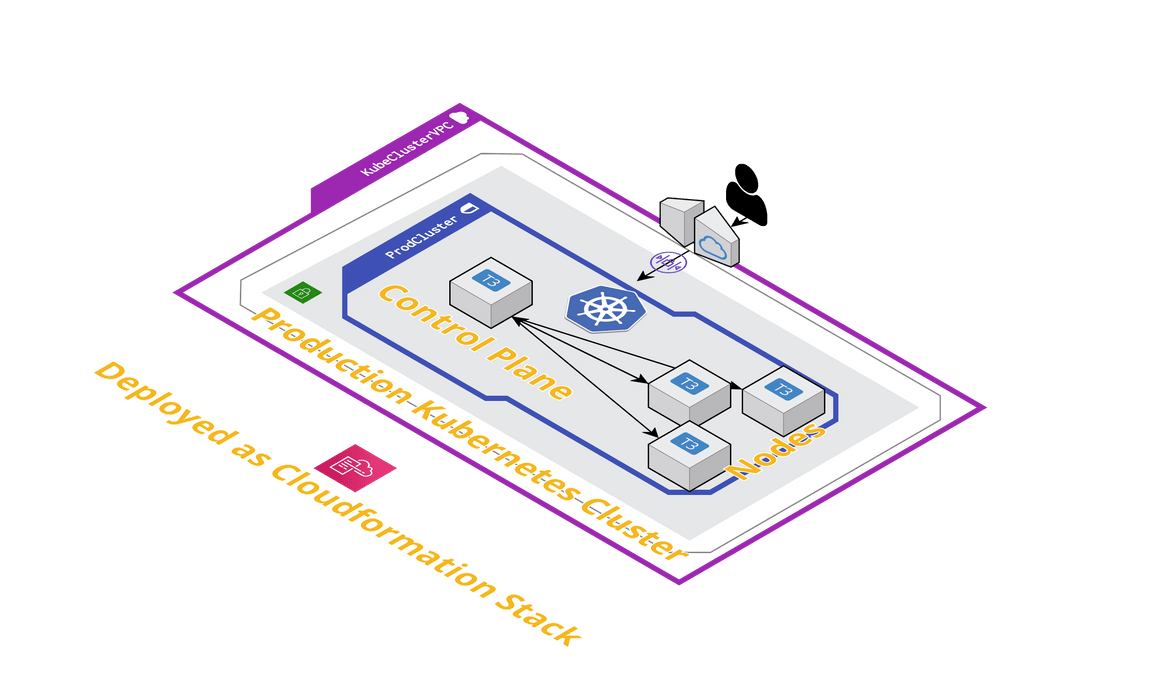 Above points should give you a good idea about how the app architecture is designed for an actual Production environment with scalable and HA incorporated in the architecture. Both the Serverless and the “Server-ful” deployments provide a resilient architecture for the app to run smoothly on both a mobile phone and pc/laptop.

Now I will dive into a skinned down version of the above architecture designed only using free and lightweight services. This is the version I am using currently to test out the app within my family members. Since in this version I have deployed using all free services, so the speed and resiliency of the app may not be as comparable to the actual architecture described above.

Below image show all the services which build up the app architecture. The architecture overall remains the same as I described above. The difference is that all the components are implemented using free services to just get the side project up and running. 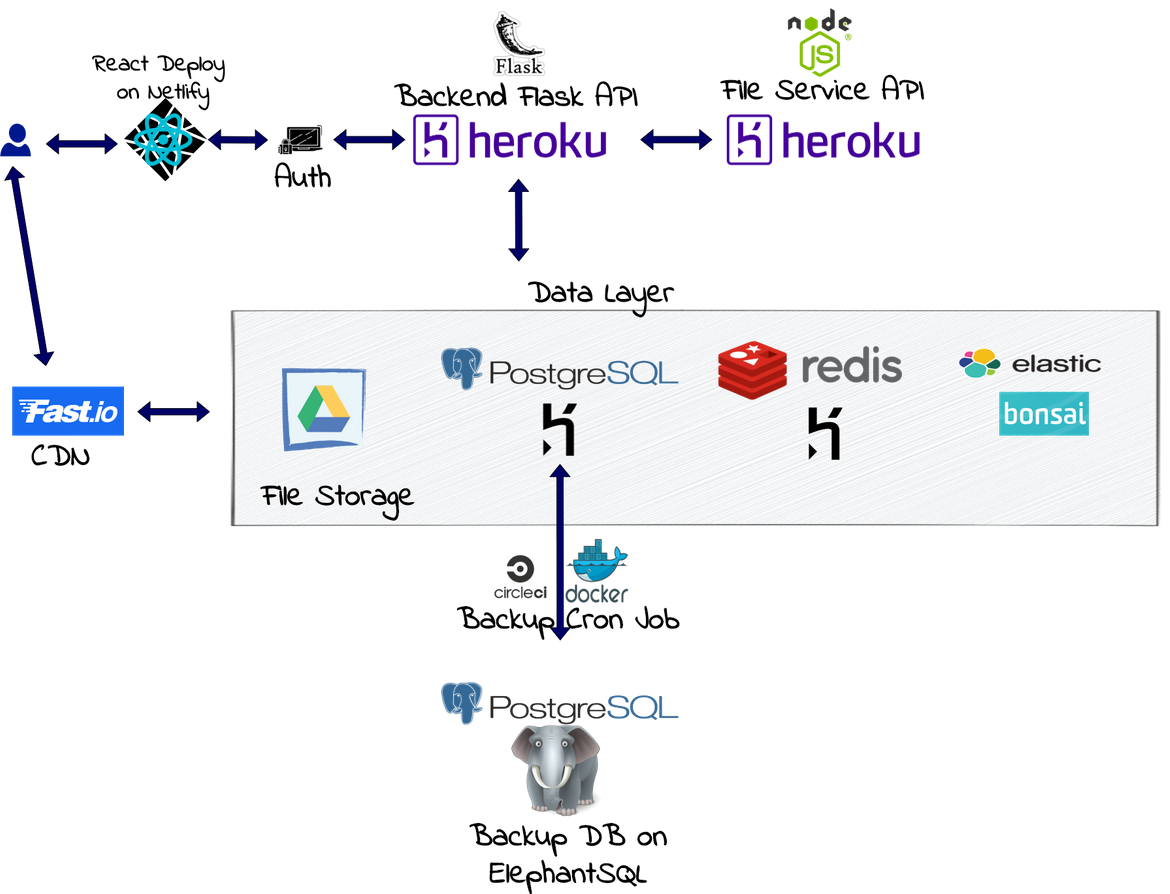 Hopefully I was able to explain the whole architecture for my app. Both of the versions are designed to build the same architecture and can be used as needed, interchangeably.

Below I provide high level description of steps I follow for the Dev deployment for each of the component.

More details for the Netlify deployment can be found Here

For the Production deployment, the deployment to Production services get triggered whenever changes are pushed to the master branch of the respective GIT repository. Below are the pipelines I built for each of the Service deployments:

Hopefully I was able to describe in detail about the system architecture which I am using for my Recipe management app. There are still rooms for improvements and I am continuously working on making the deployment more HA and fault tolerant along with having a quick access to the app data. But this post should give you a good idea about how to design a basic full stack architecture for an app using the microservices patter. If you have any questions about any part, please contact me from the Contact page.

In this post I am switching gears from my general cloud technology posts towards a bit of app development. Recently while I was working on…

I am pretty sure we all have one or more apps deployed on Heroku. It is one of the most popular platform to deploy apps encompassing various…