I am pretty sure we all have one or more apps deployed on Heroku. It is one of the most popular platform to deploy apps encompassing various technologies. I use Heroku to deploy many of my side projects as it has a generous free tier. But one thing I always struggled in Heroku was to manage the logs. I agree it is easy to get the logs on Heroku CLI with just one command but I wanted a more automated a stable solution to track the Heroku logs.
I really like how AWS enables tracking application logs in Cloudwatch Logs. Its easy to setup and we can setup multiple actions on the logs like setup alerts, prepare reports from the log data and on and on. AWS Cloudwatch is a vast solution and I cant fit its all features in one post. So I will just go through some overview.

So to have a better tracking of the Heroku logs, I went ahead and integrated the Heroku logs to Cloudwatch where I can perform further analysis on the log data. In this post I will be explaining how to achieve the same and stream any Heroku app logs to an AWS Cloudwatch log stream. Hope this will be useful for your Heroku deployments. This can also be used in any enterprise scenario where any application is deployed on Heroku.

One thing I wanted to mention here is that, the method I mention here is a very custom method of streaming the logs. With this you will have to launch your own resources and track the usage. I found this service very useful to stream your Heroku logs to AWS without worrying about managing your own resources. You can setup the stream from Heroku to AWS S3 or Cloudwatch easily without worrying about setting it up on your own. Logbox service is a 3rd party service which I have used in many of my side projects and it works well. You can explore and setup your own Heroku to AWS setup from here: Sign Up

Before we start there are a few pre-requisites you need if you need to follow along the setup. If you are using this as a guide for your work, these may already being setup for you. Also I wont go through the steps to setup each of these but I will post the document link which you can follow to perform the setup.

First let me explain a bit about Heroku. If you are first time hearing about Heroku, its worth for you to visit Here for a more detailed introduction.
In a nutshell its a cloud platform which enables you to deploy and host apps easily without worrying about the infrastructure. You can deploy apps across multiple technologies like a Nodejs app, a Flask app etc. To deploy the app, its just as easy to just run a deploy command on the application folder. You can deploy the app to Heroku cloud platform and make it available and accessible over the internet.
Heroku is also very much open source friendly. It has a generous free tier and you can deploy your side projects to Heroku staying well within free limits.

Cloudwatch is an AWS monitoring and observability service which helps us monitor our applications, infrastructure and lot more. It is not only limited to monitoring and it can also send out alerts based on events in the AWS ecosystem. Cloudwatch collects monitoring and operational data from all AWS resources and provide an unified dashboard view to easily track the metrics from those resources.
Collecting and visualizing logs is an important feature of Cloudwatch. We can ship any application logs to a Cloudwatch Log stream to have a better view of the log. Using the Cloudwatch console you can analyze the logs, search for error keywords, create and send out alerts based on error keywords from the logs and much more. You can even export the logs to S3 for storage or stream the logs to an ELK stack for further detailed analysis.
But I wont be going into all the details of each of these feature. I will be using the Cloudwatch log streams to stream logs from a Heroku application.

To setup the log streaming to Cloudwatch, there are few steps need to be followed before the streaming starts. Of course there are other ways to achieve the same but I found this way simplest and I am using this for some of my side projects too.

At high level this is what the whole solution will be performing: 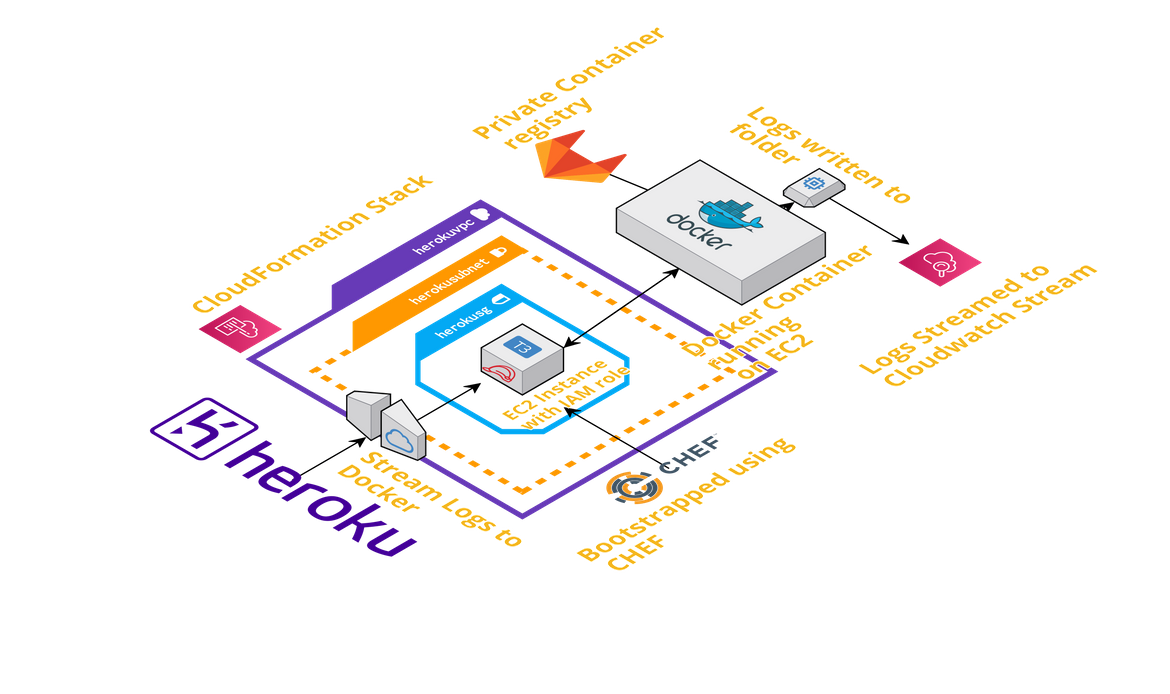 Let me go through details of each of the component above.

Now that we have some idea about the solution, let me explain how I setup a deployment process for the same.

To launch the different components of the solution, I developed a Jenkins pipeline which will be launching each component and using CHEF for configuration management. Below image will provide an overview of the pipeline

Let me go through each stage of the pipeline:

Now that you have a full view of the solution, let me explain the steps to set this up on AWS. Before proceeding, you will need to make sure you have the pre-requisites fulfilled which I specified earlier.

Let me go through the steps using which you can set this whole architecture on your own AWS account. Make sure you have the AWS account registered before proceeding further. Below image will show you on high level what we are setting up here

Lets jump on the actual steps.

There is not much to setup separately on Heroku. The logs for Heroku are enabled by default. If you have an app deployed on Heroku, you can check the logs on Heroku by logging on to Heroku and opening the app.

I am using one of my sample apps to demonstrate the steps for this post. Make sure to note down the name of the Heroku app to be used in next step for deploying the pipeline.

Now that we have all the initial setups done. Lets go ahead and deploy the pipeline to start streaming the logs. To start the pipeline setup go ahead and clone my Github repo as that will contain all the code and scripts for the pipeline. Run the below command to clone the repo and navigate to the folder

We need to modify some of the files so that the pipeline deployment is specific to your account/deployment.

Here I described a way to stream the Heroku logs to a Cloudwatch log stream. Since you have the log data now available in a Log stream, it can be further used for analysis, alerting etc. using various other AWS services. Some examples to make the solution more advanced:

Hope I was able to explain in detail about the solution I developed to stream and analyze the Heroku logs on AWS Cloudwatch. I feel its easier to analyze the logs in AWS Cloudwatch than watching the logs on Heroku. Cloudwatch also makes the log data actionable. This post shows you an easy way to get the logs from Heroku to your AWS Cloudwatch. If you have any questions regarding the process and face any issues implementing this, contact me from the Contact page.

During last few months, while being locked at home due to COVID, I thought of using my free time to build something useful. So I built an…

Recently Zoom has become very popular with many companies as a go-to means for communications. During the Covid period this year, Zoom has…