How to Launch your own Kubernetes Cluster on AWS

Any time we start learning some new technology, the first thing what comes to mind is how do I install this on my machine. I had the same thought when I started learning Kubernetes. But this is a problem I faced while learning Kubernetes. I couldn’t find a good resource to guide me through a setup of Kubernetes cluster for my learning. So I thought let me document the steps which worked for me so that it can help someone too. The steps which I will be describing here will help you stand up a Kubernetes cluster for your learning practice. I wouldn’t recommend use this method for a Production cluster as there are many other considerations to take into account for a production environment.

I will be installing Kubernetes on an EC2 instance to act as master and join another EC2 instance as a node. To launch the infrastructure I am using CloudFormation. The template and codebase is all present in my Github repo: Here

If I quote from the official docs, “It is is an open-source system for automating deployment, scaling, and management of containerized applications”. In simple words, it is an orchestration tool to manage running of containerized applications. You can declaratively maintain how and where the containers run for an application. It can easily scale the application and its underlying containers without much effort from ops team. Kubernetes is being used in many of modern large applications to manage automated deployments and work in tandem with CI/CD pipelines. Kubernetes supports many different container runtimes but I will focus on Docker.

Installation of Kubernetes and setting up a cluster can be a challenge as there are multiple steps to stand up a full fledged cluster. The steps I go through will setup a basic cluster which will be enough for any learning and practice you want to do.

Before I start the setup let me explain a bit about what exactly I will be setting up.

There are two main components in a Kubernetes cluster:

There is one more component which is important and that is the Networking component. As I mentioned above Kubernetes by default follows a flat Network structure. All Pods can talk to each other to be precise. To control and customize networking behavior within the cluster, there are third party network plugins available which can be used. I wont go into much detail about networking but know that this is an important consideration while launching a production grade cluster. For this post I will be using Flannel (Read More) as the Network plugin.

Overview of the Steps

I will be following the below high level steps to get the full cluster up and running.

There are few pre-requisites before you can start the cluster setup:

I have tested the process with below versions:

Let me go through each of the above phases and explain step by step how to complete each of them.

I will be provisioning two instances. Here I have used CloudFormation to ease the launch of EC2 instances but you can do these steps manually too from the AWS console. To get the CF template first clone my Github repo to your local and navigate to the folder

Before you start launching the instances, you will need to create a key pair in AWS. Navigate to AWS console and create a Key pair from the EC2 Services page: 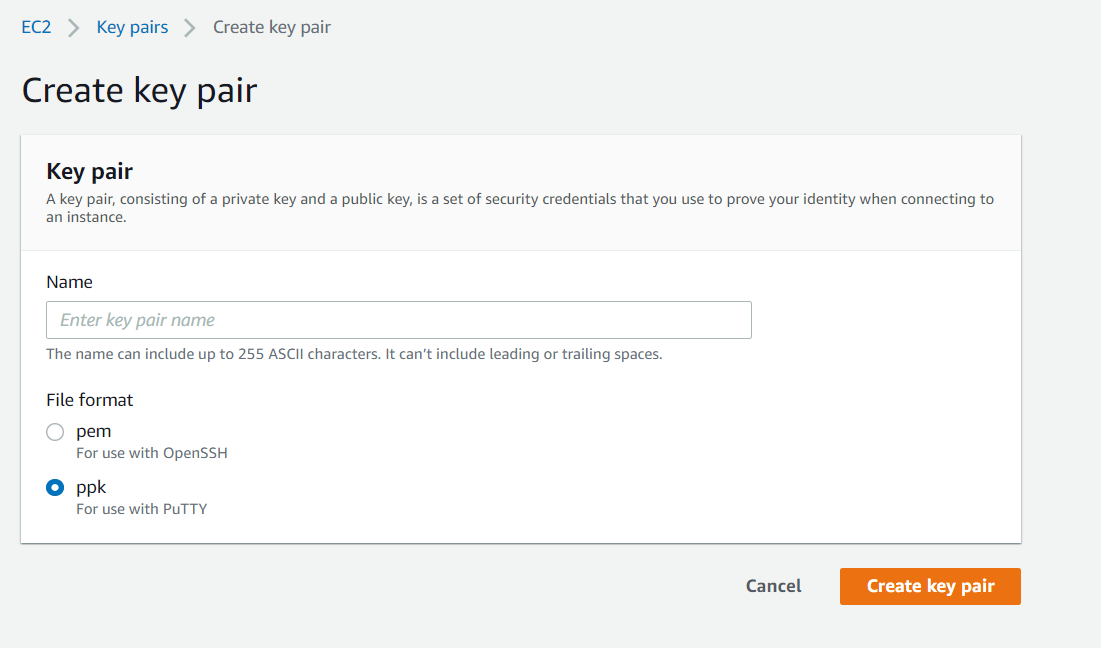 Make sure to download and keep the key safe. Now you can start the provisioning steps.

Note down the Public DNS names or Public IPs for both of the instances. We will need this in next steps.

Once we have the instances, we move over to installation of Kubernetes and required dependencies. I will separate out the commands which you need to run on both machines and which only on the Control plane. SSH in each machine to run the commands.

Now that the cluster is up and running, go ahead and test the cluster by running a simple pod. Run the below command which will launch a Nginx Pod.

Verify that the pod is running successfully.

I hope the steps I went through will help you with launching your own Kubernetes cluster. Kubernetes is becoming a very widely used Container orchestration tool and it will be very useful if you have your own practice cluster while you are learning Kubernetes. If you are planning to launch a Production grade cluster, make sure to go through the extra considerations to improve the cluster in relation to security and networking. For any questions, please reach out to me.

AWS CLI Series : How to use CloudFormation We all love to work with command line right? At least I love the ease of just opening a console…