AWS CLI Series : How to use CloudFormation

We all love to work with command line right? At least I love the ease of just opening a console and write a command to accomplish a task. I agree it may seem overwhelming at first but once we get used to it, a command line is our friend. To extend on that I am coming up with multiple posts to walk through some basic frequently used commands using which various AWS services can be controlled or managed. Yes AWS provides a whole command line only experience through which all of the AWS services can be managed. When I started learning AWS and wanted to run the CLI commands I struggled to understand the commands from the documentation and had to do lot of trial and errors to finally make them work. So I am planning to write these series of posts for such beginners who are trying to learn the CLI way of doing things on AWS.

This post is first of many more posts where I will describe how to perform some basic management functions on various AWS services. In each post I will pick up an AWS service and provide a step by step guide to show how the service can be managed from command line.

The whole Code base is available on my Github Repo: Here

AWS CLI is an open source tool which you can install on a machine and using that run various commands on the console. Using the CLI and through a minimal configuration you can have a simplistic interface and have the same functionality as the web console. CLI proves very useful for CI/CD pipelines where the pipeline can run the CLI commands to achieve various tasks on AWS. It is available on different terminal programs and can be used accordingly based on what OS you are using:

To follow along the commands, there are a few Pre requisites which you will have to make sure to have:

In this post I will be going through the last two steps with a pre-defined CF template which I have created. This post is to help with some basic beginner steps to start using CLI for Cloudformation. I didn’t go into much detail of all Cloudformation commands as that will become a very long post.

What will we build 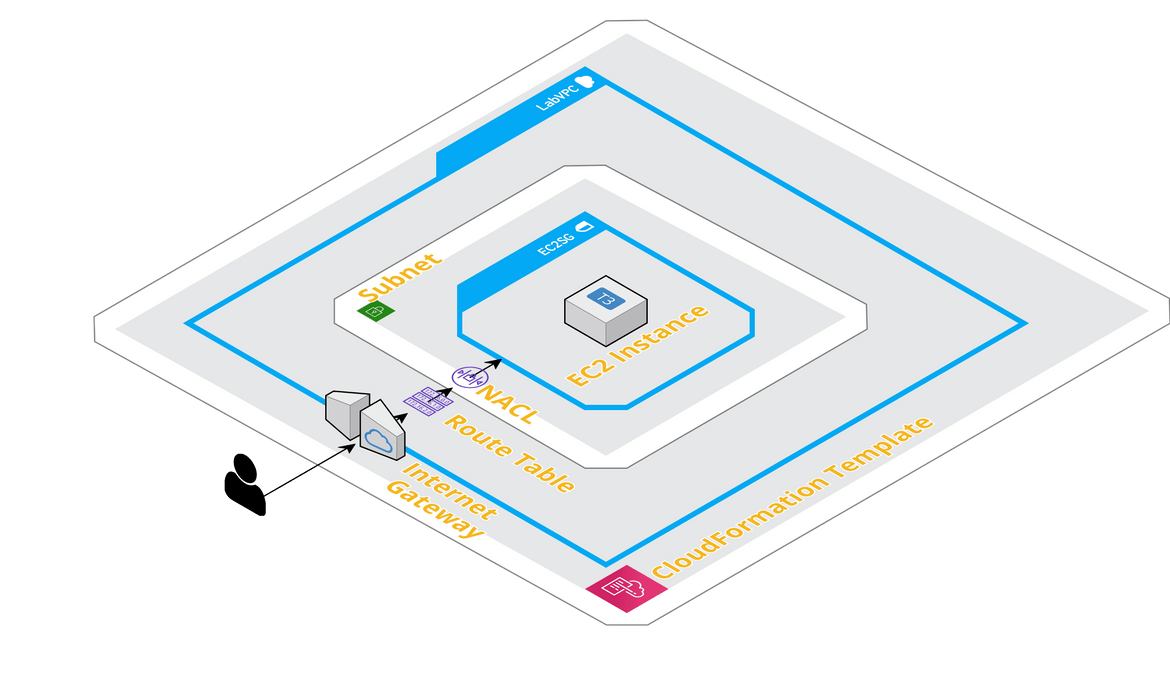 Below components will be launched as part of the architecture:

Before we can use the CLI, we need to install and configure the CLI on our system or on any system where you are planning to use the CLI. It needs to be configured so that it can connect to the proper AWS environment to perform the tasks. Follow the below steps to prepare the CLI for further use:

Create IAM User: We will need a specific user which will be used by the CLI to connect to AWS. This can be created separately from the Web console. To create the user:

Create a SSH Key: Create a new SSH Key from the EC2 page on web console. Download and store the key to be used later. 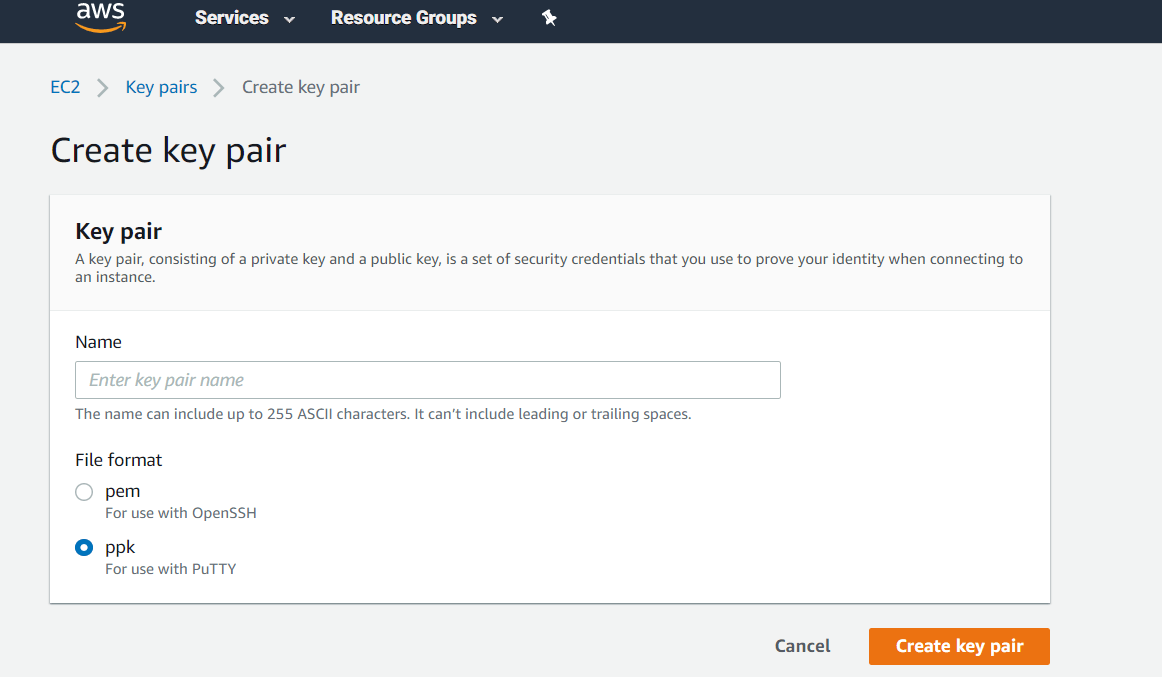 Install CLI:
Once we have the user we move on to install the CLI on our system. Based on whether you are using on local machine or on a VM, login to the system to configure the CLI. The steps to install will differ based on which OS you are using. Different OS options are available on AWS official Docs Here.
Since I am using Windows I will go through the Install option for Windows:

Configure CLI: Next step is to configure the CLI to be able to use it with an AWS environment. I will be configuring a custom profile for the CLI. You can have multiple profiles for the CLI to connect to different environments or users from the same system. Run the below commands to configure the CLI. When prompted enter the respective access keys which were noted on earlier step from the IAM user.

That completes the config of the CLI on your system. Now the CLI is ready to connect to the AWS instance to manage resources.

We will be performing few steps through CLI to perform various Cloudformation functions:

Before you start, clone my Github repo on your local machine and navigate to the folder. That should contain the sample Cloudformation template.

Run the below command to launch the stack:

This will start the creation of the stack and output the Stack ID. Note the Stack ID for the next commands:

These are the parameters which get passed with the command:

These are the most basic parameters to pass with the command for creation of the stack. There are some other parameters too which can be passed to control other aspects of the stack creation like what to do on error, timeout config etc. But for this example I will go with these basic options.

Check the Status of the Stack

Run the below command to check the status of the creation. Pass the Stack ID we copied earlier as input:

This will output the status of the Stack creation

Check AWS Web console to confirm the resources were created.

Get the Instance IP which the CloudFormation stack launched

In the CF template the Output step was specified to return the IP after Stack creation: 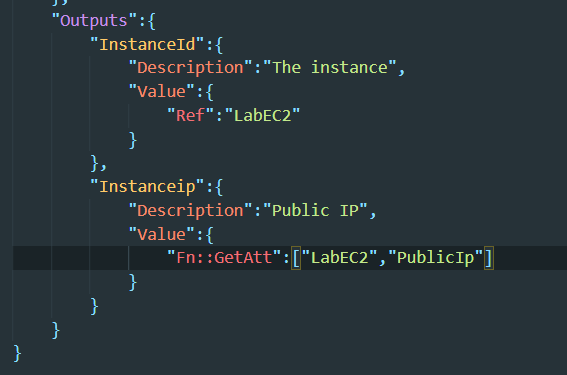 To see the whole output showing various information about the Stack, run this command:

It should show the full information about the stack: 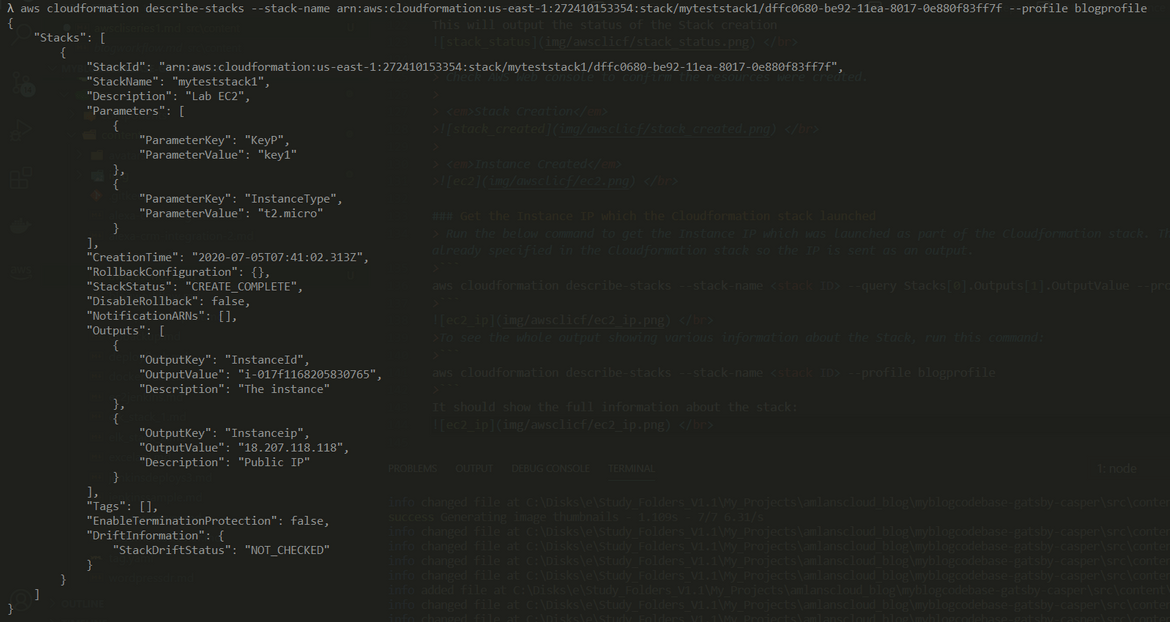 Check the drift Status of the Stack

There are instances when someone may change the stack resources from the AWS web console or outside of Cloudformation. These changes make it hard to track when and how the resources changed since they were not done via the Cloudformation stack. For such scenarios Cloudformation provides a feature called Drift Status. When checked it shows if the resources are in a state which differs than the state defined in the stack. To check the drift status lets first update a resource from the web console. Update the Security group which is part of the stack, and add a new port rule to it(open port 5000).

To check the drift status, run the below command:

This initiates the Drift detection process. To check the status output, run the below command:

Run the below command to delete the stack and remove all resources from AWS:

This initiates the deletion of the stack and the resources are deleted:

This concludes all the steps which I wanted to cover to describe the process of using Cloudformation using CLI.

In this post I have just scratched the surface about the Cloudformation CLI commands. There are whole lot of other commands through which every aspect of Cloudformation can be controlled using CLI. The commands I explained are some basic useful commands which will help build the knowledge of CLI usage of Cloudformation. Hope this post helps someone start their journey with AWS CLI. I will be coming up with a new AWS service and its CLI usage next. Till then if you have any questions reach out to me directly from the Contact page.

How to Launch your own Kubernetes Cluster on AWS Any time we start learning some new technology, the first thing what comes to mind is how…