We all have searched for stuff on Yelp from time to time. While learning some Machine learning, I came up with this idea to better the search on Yelp based on those tons of reviews which get entered everyday on Yelp. This app really helped me learn the ML concepts and understand the complexities of deploying an ML model. Through this post I wanted to share what I have learnt so someone can use this in their path to learn.

Since its really a broad topic and the app includes so many moving components, I will be covering the app and its deployment in two posts. The series will consist of two parts:

For this post I don’t any GitHub repo ready yet. The repo will be part of my next post with all the deployment and code files. But a limited demo of the app can be found here: Here

Before I start, if you want to follow along and understand this, here are few pre-requisites you need to take care of in terms of installation and understanding:

What is NLP and how its implemented using Python

NLP or Natural Language Processing is a sub-field of Artificial Intelligence. It deals with interpreting the language between human and machine. Using NLP, simple text can be analyzed and interpreted by a computer. In simple words, using NLP, a computer program can interpret text and respond with a corresponding response.
There are multiple ways to implement NLP. Here I implemented NLP using Python. In Python NLP can be easily implemented using a library called Spacy. Its a free open source library which can be used to implement multiple use cases for NLP. To install spacy in your project, run this command. This assumes you already have pip installed:

Let me first explain about my app. In below sections, I am going through the functionality of this app and technical components involved.

Below image shows high level functionality of the flow.

Using this app one can search best restaurants in a local area, based on top reviews on Yelp. The application takes in a keyword and based on that searches all local restaurants and then returns back top reviewed ones. At high level this is what you can do with the app: 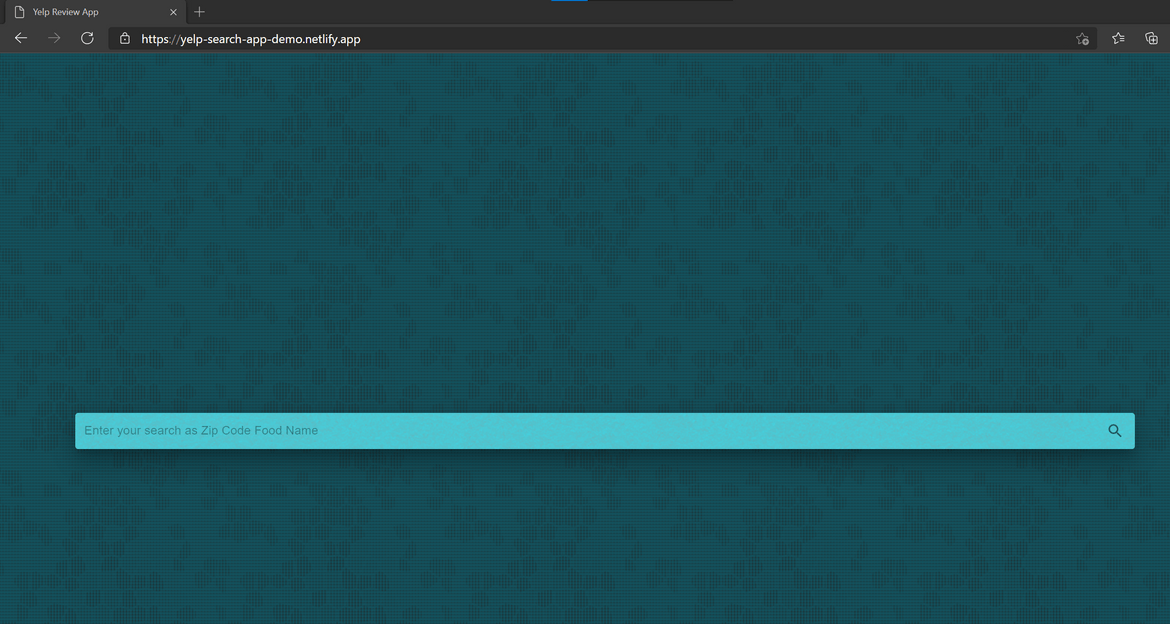 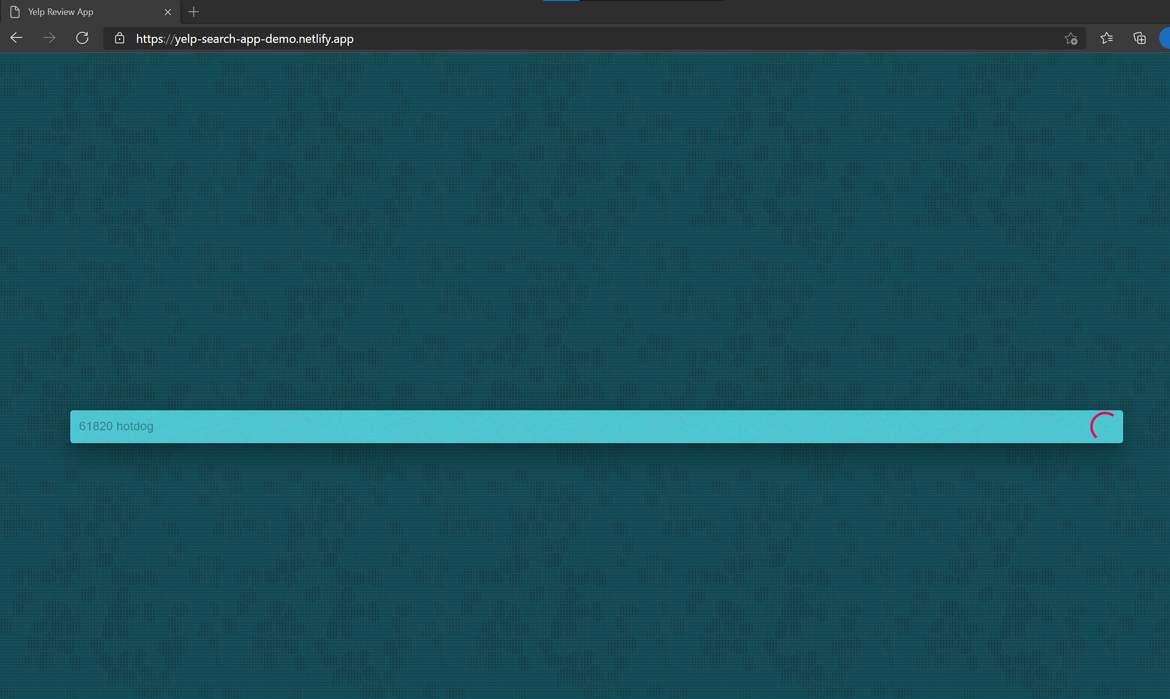 The app uses a specific Yelp dataset on which the NLP model is trained and runs to perform the searches. I am using the dataset which is provided by yelp. The data consist of two files:

I am using the raw data provided by Yelp and by the data cron jobs, processing the files to output data containing the review sentiments. Below is the high level process I am following to manage the data:

Also the NLP model is converted to a file which is read by the API during processing of the search requests. This model gets updated and tuned by the weekly job.

Now that we have seen how the app works, let me explain a bit about the technology behind. There are three main parts of the application: 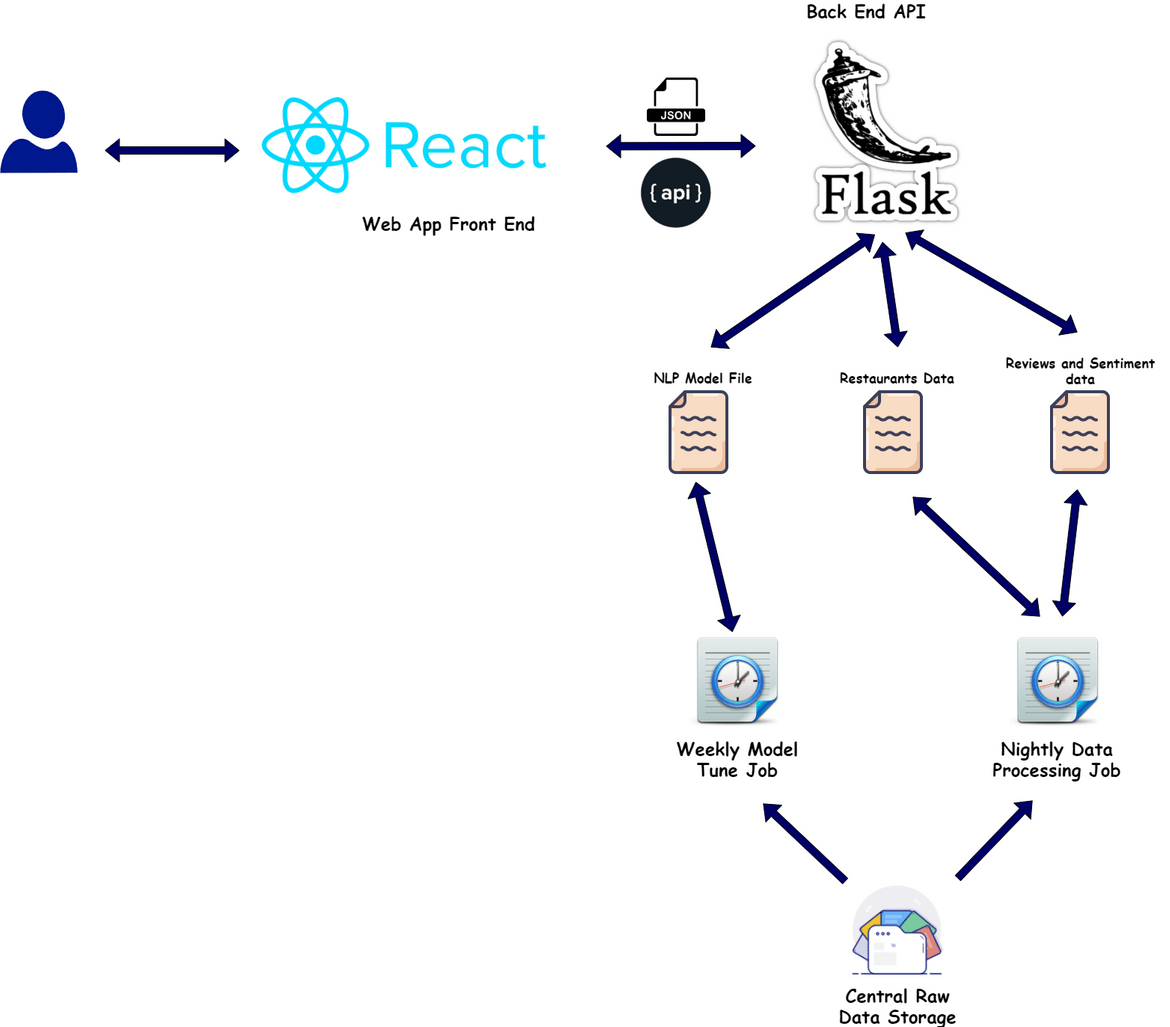 Each layer is deployed separately on their own AWS services stacks. Let me go through each layer and describe what they comprise of. 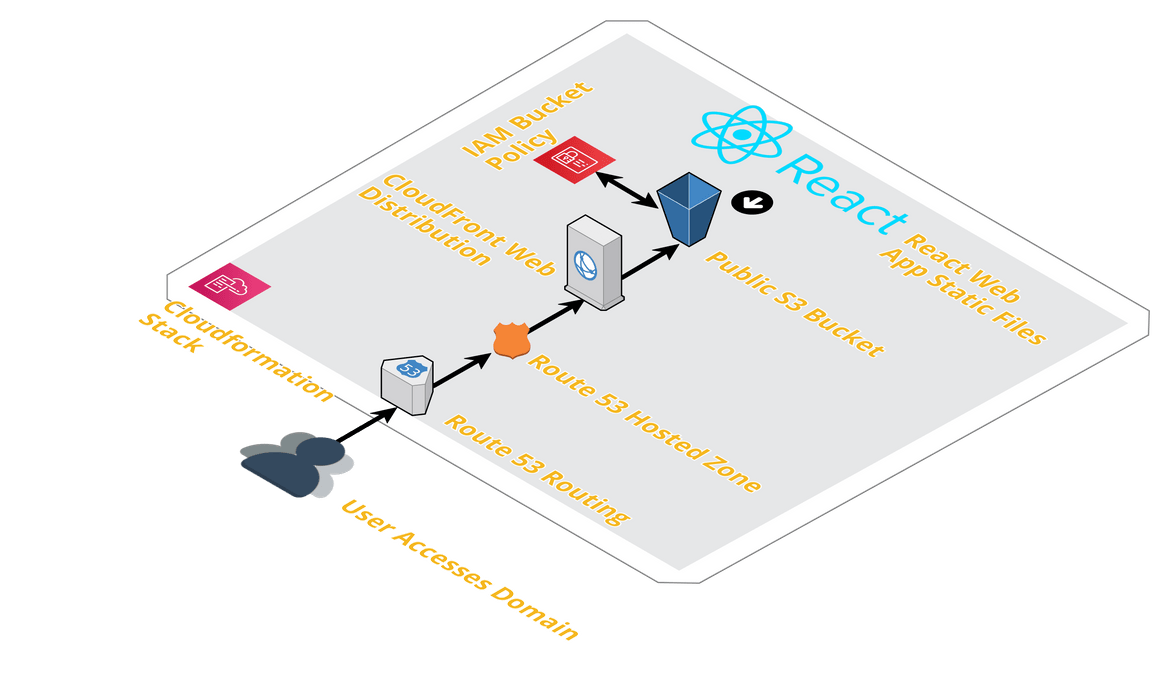 All these components are deployed as part of a Cloudformation stack which I will be going through in next post. 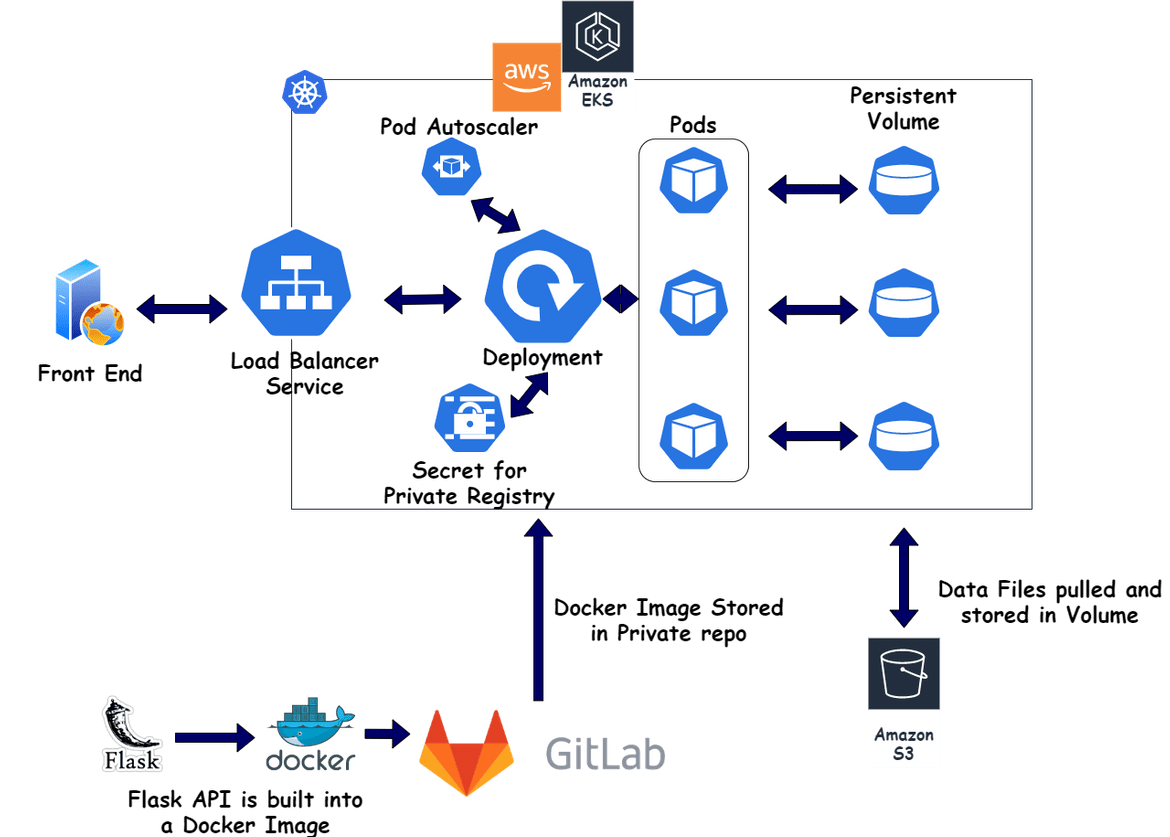 These are the different Kubernetes components which are deployed on the AWS EKS cluster.

All of the components are deployed to an AWS EKS cluster. The cluster is also deployed as part of the deployment using Cloudformation templates. The EKS cluster consists of a managed Control plane which is managed by AWS. I have attached one node group to the cluster which scales out and in between 2 and 4 nodes. It launches EC2 instances based on the official EKS AMI. 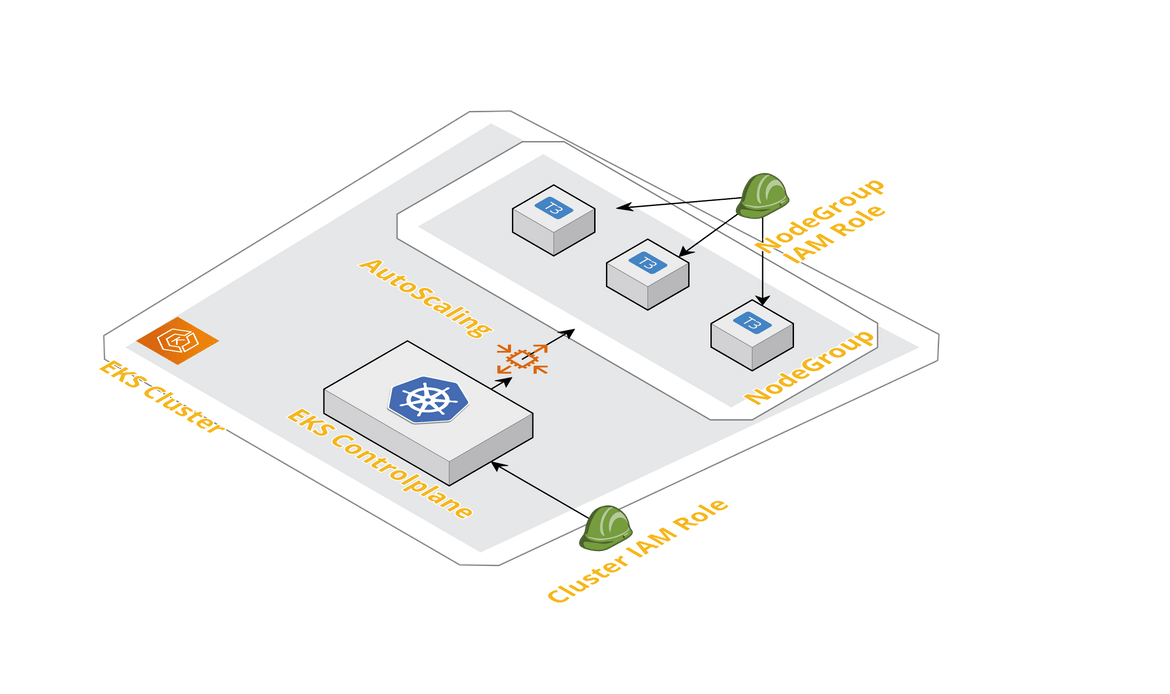 Data is a central part of this app. All the searches use NLP algorithm and search on the Yelp specific data which are stored in two data files. Two data files which are involved in the algorithm execution are:
- Restaurants data: Metadata about restaurants like name, location etc.
- Reviews data: All reviews related data

To prepare the data files, there are two scheduled Cron Jobs which run weekly and nightly. The jobs are scheduled as Kubernetes Cron jobs. Let me go through high level what each job does: 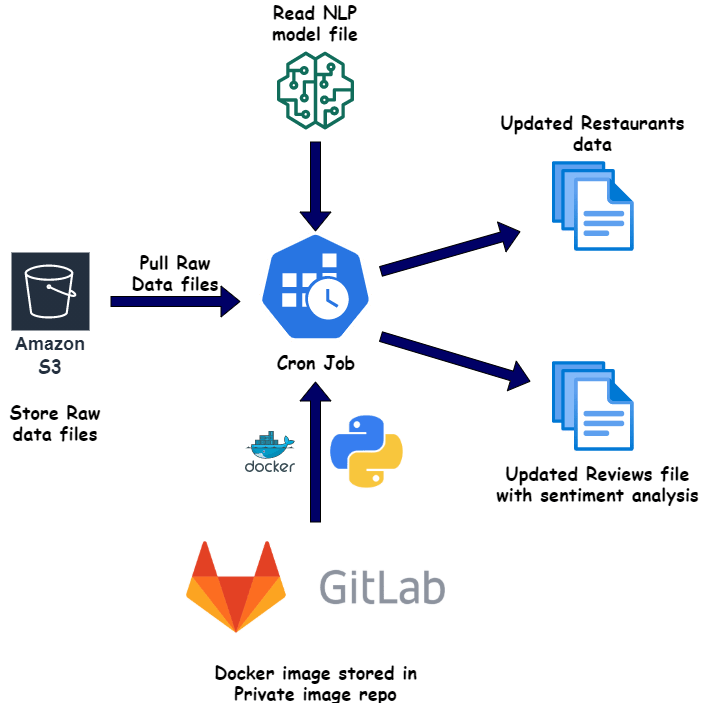 New data which is scraped throughout the day from Yelp, is placed in a S3 bucket. This job reads the updated raw data files and process those files to convert to format acceptable by the Flask API code. This job ensures the Restaurants and Reviews data files are up to date with new data daily so that the app can return accurate and updated results. 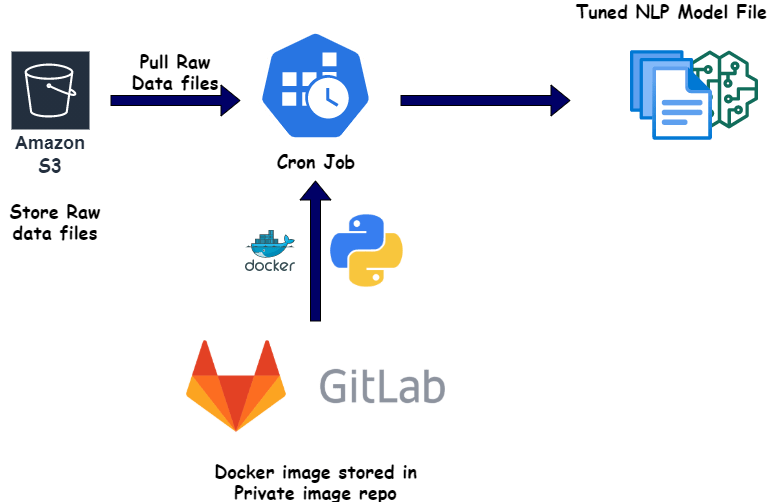 This job reads the latest data files from a S3 bucket and outputs the updated NLP model file to be used by the API.

These are the different components which overall make up the application ecosystem. Each of the components are deployed separately on different AWS services.

In the upcoming second part of this post series, I will be going through how each of the above components are deployed on AWS. These are upcoming on my next post:

So stay tuned for the next post (hopefully soon).

In this post hope I was able to explain and provide an overview of the app I built and what components are involved in it. Getting in more details will make this very long so I provided overview of each and how they contribute towards working of the app. If you have questions please reach out to me via the Contacts page and I will be happy to answer questions. For now, stay tuned for the next part of this post and learn more about the deployment portion of it. Stay Tuned!!!!

This is the second part of the post series which you can find Here. In the last post I described about the app and how it is built. Just to…