I have been working on implementing CRM applications for most of my career. All the CRM applications which I have worked with have a common pattern for access where users login to the application and then look through stuff to find what they need to work on. So I thought why not streamline that process a little bit. With current boom in AI, why not add some AI flavor to the CRM application.

So I came up with this solution to have a Conversational interface for the CRM where one can get info from the CRM just like chatting with someone. Makes it interesting for the user to interact with the application too. In this post I am describing the solution which I built to give a conversational interface to Salesforce application. Also while at it, I cover steps about deploying Infrastructure using Terraform and Jenkins. Hope it will be a good learning for some of you.

A demo of this in action can be found below:

CRM (Customer Relationship Management) is an important part for any organization. Managing Customers and interactions with them is a critical part of any business process in an organization. To smoothen the process and to help business teams efficiently manage customers and their deals, there are many software solutions out there which handle the complexities of the process. For this solution I have used Salesforce (aka SFDC) as the CRM application backend.

To define CRM, its a process to manage all customers and interactions with those customers efficiently. A CRM application helps achieve those goals by simplifying the customer management so users can focus on managing customers. This is a very short definition of CRM. Its a vast topic to be learnt separately. For now lets dive into the interesting part of having a conversational interface for this CRM.

If you want to follow along and deploy a similar solution, there are few pre-requisites which need to be taken care before we proceed:

Lets get into describing what actually does this application do. Below image will explain an overall functional flow for the application.

Let me explain the flow of the functionality with an example command. In below example, user needs to get a lead to work on. So the user opens up the app and the process follows:

This will present a simple interface to the user to interact with the CRM application. Lets move towards the technical details of this application.

Below image shows the overall tech stack build for the whole application. These are the two main core components which constitute the main “brain” of this:

Let me go through each of the component:

Front end is the Chat UI which user interacts with and exchange messages with the Bot. Its a simple web page which exposes the Chat widget. I am using the Chat widget published by Amazon for an easy interface. You can find it Here.
The Front end consist of two components:

The back end API provides a public endpoint by which the Amazon connect call flow can be invoked. This API endpoint is being called by the front end web page to perform all the functions. These are the components in the Back end API:

Here the main Call flow is defined which orchestrates the whole Chat flow from user opening the chat to ending of the Chat. The call flow controls how the Chat progresses and what step to take at each request/response. It is a Contact flow containing steps to call Lex and Chat channel steps. At high level this what the Call flow follows:

This is the main brain of the whole application. An Amazon Lex bot is deployed which communicates to both Amazon connect and the CRM application performing the necessary actions. Here is high level how the bot works:

Lambda for the Lex Bot

That completes all of the components of the architecture. Lets move on to deploying this whole setup.

Before I move to the deployment, let me explain the folder structure I have for this. The code can be found on my GitHub repo if you want to deploy a similar solution. 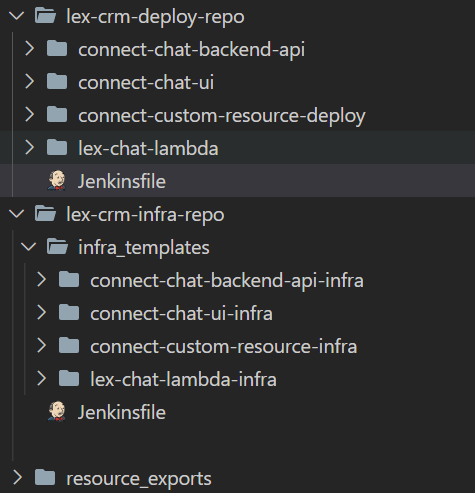 At high level this is divided in two parts:

There is one more folder called ‘resource_exports’ where I am storing the export file for the Lex bot from the development environment. This will be imported on the target environment for deployment.

Lets move on to deploying the whole architecture and its components. The deployment is divided in to two parts and each part has its own deployment pipeline using Jenkins:

Lets go through each step:

When the pipeline is ran the first time, Terraform need to access the S3 buckets to store the state. So in this step the state buckets get created where Terraform will be syncing the state from each of the infrastructure component config. Its a simple AWS CLI step to create the buckets.

In this step we deploy the infrastructure need to deploy the Lambda which will be used by Lex to communicate with CRM. The components are defined in the Terraform config. Below are the components which are deployed in this step:

Deploy Infrastructure for the UI

This step deploys the infrastructure need to host the UI static web files. These are the resources which get deployed in this stage:

In this step we will deploy the infrastructure needed by the Chat Backend API. This API will be accessed by the UI frontend to talk to the Amazon Connect call flow. These are the resources deployed as part of this stage:

That completes all of the steps for the Infrastructure deployment. Lets go ahead with the actual deployment of these components.

Steps to Deploy the Infrastructure

Now that we have the pre-reqs defined. Lets deploy the pipeline and deploy the infrastructure.

The app components are also deployed via a Jenkins pipeline. Let me first go through the release pipeline for the app deployment.

Lets go through each of the steps:

In this step we will deploy the Lambda function which is the backend for the Lex bot. At high level these are the steps which are followed in this stage:

At high level these are the steps to deploy the Custom resource:

This stage deploys the UI front end for the app. It will deploy the Chat UI which users will interact with. The UI consist of HTML and JS files which will be interacting with the backend API to perform the operations. The HTML and JS files are hosted in an S3 bucket which gets served by the Cloudfront. So this stage of Jenkins just copies the files to the target S3 bucket.

This stage will deploy the backend API and the API Gateway. This API will be communicating to the Amazon connect call flow to perform the chat functionalities. For the API I am using AWS supplied sample ChatSDK and sample Lambda. It is a NodeJS lambda function which will be the source for the API. Below steps are performed in this stage to deploy the components:

Now that we understand each of the stages, lets move on to deploy the application.

Steps to Deploy the application

The app components will be deployed via another Jenkins pipeline. This pipeline will also use the same credentials for AWS which was setup during the infrastructure deployment. So we don’t need to setup the credentials again:

Also to start the deployment, some of the components are not part of the pipeline and need to be deployed manually. Let me go through those items:

Now that all the app components are deployed. There is one last step to connect the front end to the backend API. Update the variables on the front end JS file to point to the API gateway which was deployed above as part of the pipeline.

Once updated and pushed, the pipeline will run again updating the UI files. At this point the fully functional application should be ready. Navigate to the Cloudfront endpoint and it should open the chat interface login page. Pass the CRM credentials to login and open the chat UI:

That completes the whole deployment and the app is now live. Hope that provided a good description of the Conversational CRM using Lex.

The example which I show here is just the basic version of the app. There are lots of improvements which I am working on to make the application more user friendly. Some of the ones to note here:

Well that completes this post. Hope I was able to describe my little project and you were able to have some learning from it. If you are trying this solution out, go ahead and start the practice. CRM applications have been very popular in recent times. With recent boom of AI if the same flavor can be added to a CRM application, it will a very useful step up on the user experience. You can contact me if you have questions or find any issues.

This is the second part of the post series which you can find Here. In the last post I described about the app and how it is built. Just to…

Recently I started reading about AWS Amplify and found it very interesting. I was very impressed to see how easily one can deploy a full…