In this post I will go through a simple Jenkinsfile which defines a generic development to deployment flow for a Java web app using JSP. I will be explaining each phase of the flow along with the code snippets. Below are the components used to complete the flow:

The full codebase can be found on my GitHub Repository:
https://github.com/amlana21/jenkinssampleflow

The supporting Docker images can be found on my Docker Hub page:
https://hub.docker.com/u/awsacdev

I have used a sample web app to demonstrate the flow but this can be customized to test and deploy other platform apps too(like NodeJS or simple webpage).
Below image gives a high level view of the process which is built in the Jenkinsfile. We will go through each phase in detail. 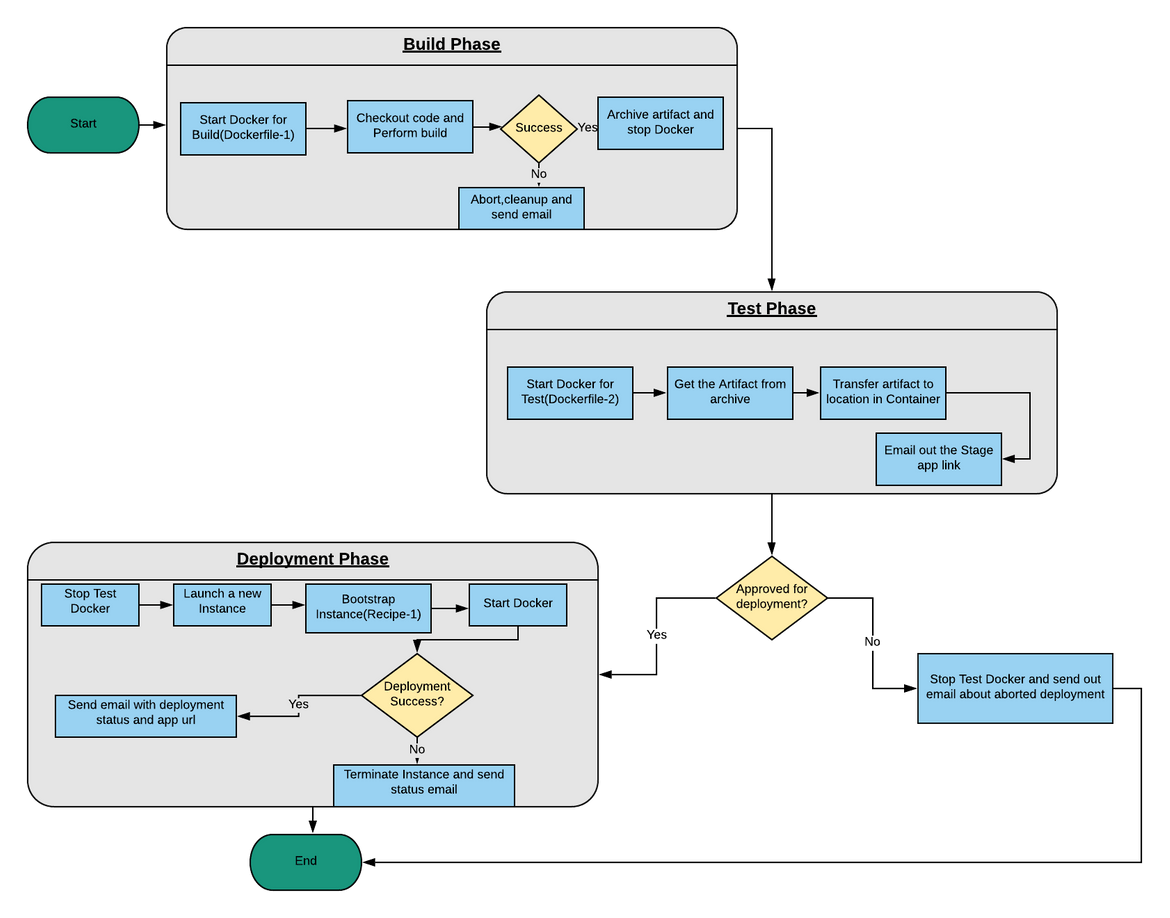 Few lines about the sample App

The sample app which I used in this flow is a straight forward Java Web App. The UI is a JSP page with the logic built in Java. This a view of the App. I havent made the app very complex beause target of this is the Jenkins process. The app consists of a text box. When a text is entered in the textbox, and the form is submitted, the text entered is shown in the read-only textbox below.

Pre-Requisites to run the Pipeline

Before this pipeline can be executed, below steps and setups are required to be done for the Jenkins flow to run properly:

Walkthrough of each Phase involved in the flow

In following sections I will be describing each phase in detail and describing how each phase works. This is the pipeline view in the modern Blue Ocean UI:

This phase performs the compile and building of the code to generate the WAR file. This phase compiles the code and checks if the change introduced works with the existing code. If the build fails, that means the new change which triggered the flow, breaks the code and should be rolled back. This phase is the CI(Continuous Integration) part of the process. Below is the code snippet for this phase:

The build is performed in a temporary docker container which is launched just for the build phase. The docker container is laucnhed from the image which is built from the Docker file in the ‘build’ folder. This specified in the agent section. Below are the build steps which are performed:

Once the build is done, this phase will handle the testing of the web app. This is a manual testing step and will be performed by a manual intervention. Below is the code snippet for this phase:

For the test, a Docker container is launched with a customized image for Tomcat.The image is available on my account in DockerHub. The image name is: awsacdev/ubuntutomcat.
Details of the image can be found here:
https://cloud.docker.com/u/awsacdev/repository/docker/awsacdev/ubuntutomcat
Below steps are performed in this phase:

This is not really a separate phase but is more of an approval step to approve the deployment of the code to Production or reject the build to stop the pipeline execution. It is built as a phase to keep the email approval part separate and properly visible. Below is the code snippet for this phase:

Once the staging container is launched in the Testing phase and email is received by the person who is testing and approving, he/she can test the app from the link in the email. Once decided, the person can login to Jenkins and Approve or Reject on the prompt which pops up on the pipeline. This step pauses the pipeline execution and waits for the user input to allow proceeding with the flow or abort the flow.
I used a script step to embed a scripted pipeline component in the declarative pipeline. If the approver selects proceed, this will set an environment variable which will be used in the next stage to decide on the Production deployment. The approver is presented with a prompy like this when they login to Jenkins using the link sent over the email:

Note: Please do not use input step this way in Production. In actual prodction flow the tester and Production deployment approver will be separate persons and the pipeline has to be customized accordingly.

This is the final phase where the app is deployed to Production instance.This step runs based on the output from previous step. Based on the environment variable set in the previous step, this step runs or is skipped. This step launches a new instance and deploys the WAR file to a Docker container in the Production instance. Below is the code snippet for this phase.. I am not including the whole phase since its a big section. Please check the Github Repository for full code:

Below are high level steps performed in this phase:

There is a final stage included to handle steps when the approver rejects in the approval step. This step performs the necessary cleanups and ends the pipeline. Below is the code snippet for this phase

Different components used in the Pipeline

Below is an overview of the Dockerfile, Docker images and the CHEF Repo used in the pipeline.

The docker file which is used to build the image for the build container, consists of the following packages:

More details for the image can be found on my Docker Hub page:
https://cloud.docker.com/u/awsacdev/repository/docker/awsacdev/ubuntu_tomcat

Below are the high level descriptions of the tasks performed by the CHEF role. It contains a role which applies the necessary recipes to the target. Steps:

This Jenkins pipeline will help you with some basics on how to write a Jenkinsfile and how to run a Development to Deployment process. To use this pipeline in a Production grade flow, below are some suggestions which can be implemented:

This pipeline can be customized to handle other deployment processes too like NodeJS app, Flask App etc. The phases and steps need to be changed accordingly in the Jenkinsfile. Let me know in comments or email me and I can write a post about a deployment pipeline for other apps.

Please let me know if any questions reagrding the flow and its components. You can email me at amlanc@achakladar.com