This is the 2nd part of 2-part series post, where I am walking through a way to deploy the Elasticsearch, Logstash, Kibana (ELK) Stack. In this part of the post, I will be walking through the steps to deploy Logstash as a Docker service and launching Filebeat containers to monitor the logs. I am using custom Docker images for LogStash and Filebeat to customize settings through custom config files for both.I have also included both Dockerfiles and the custom config files in the repo. If any other custom settings are needed, define the parameters in the config file and rebuild the images from the Dockerfiles.

Below are the Pre-requisites which will be needed to be installed on the servers or instances where Logstash or Filebeat will be running:

The code files can be found in the below Github repo:
https://github.com/amlana21/elkstack-publish

Below are the components which we will be launching or configuring through the below steps.

I have explained the overall architecture of this setup in part 1 of the series.Below is the architecture for reference. 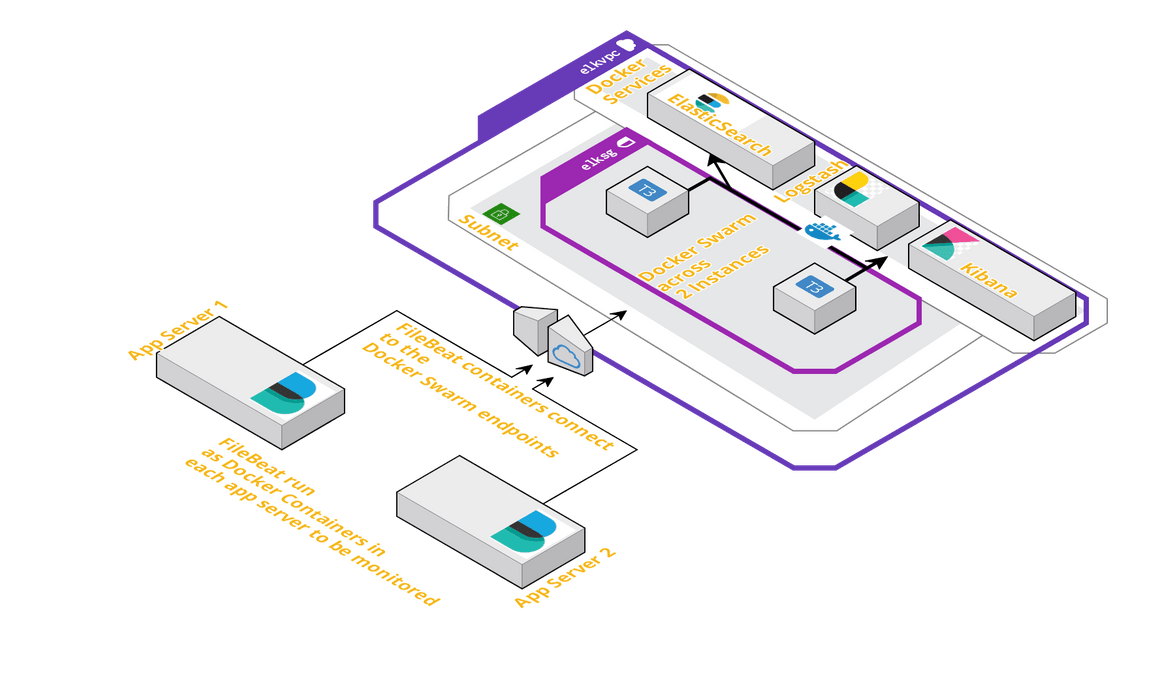 In this part, I will be explaining about launching of the Logstash Docker service to the swarm and how to setup the Filebeat container in each of the app servers.The infrastructure required can be launched using the Cloudformation template which I have included in the Github repo.That template can be used to launch a Cloudformation stack which will provision the necessary networking resources and the Instances.Once the instances are launched, latest Docker need to be installed on the instances and the Docker service need to be started.

Below is the Docker-compose snippet which will launch the Logstash service:

This uses a custom Logstash image to customize the Logstash options using a customized config file and a custom pipeline file.The image can be found on Docker hub: https://hub.docker.com/u/awsacdev. This custom image is configured to monitor incoming log data from Filebeat and also uses the File input plugin to monitor some local log folder. I have also included the Dockerfile in the Github repo. As a pre-requisite, create a local folder as the local monitored log folder, and specify the local folder in the Volume mount statement on the above Docker compose snippet above.

This cannot be tested separately as it is dependent on the Elasticsearch service. We will test this below once launched along with the other services.

Filebeat will be launched as a Docker container in each of the app server separately. I am using a custom Filebeat Docker image to configure the output Logstash endpoint and the local log folder paths.The cusom image can be found at: https://hub.docker.com/repository/docker/awsacdev/custom-filebeat. I have also included the filebeat.yml file in the Github repo. I will be explaining the steps to launch the Filebeat container below when launching the whole stack.

Now that we have an understanding of all the separate components as Docker services, we will be launching the full stack with all the three services (Elasticsearch, Logstash and Kibana). Once that is launched I will be explaining how to launch and configure the Filebeat container to ship logs to the Logstash service.

First step is to initiate the Docker swarm.Run the following command on the instance which is supposed to be the manager node:

Before deploying the stack, for the Logstash service we will need a local folder path to be bind mounted to the Docker service. Please follow the steps above in the Logstash section to prepare the folder.
Below is the compose file code to deploy the stack. Copy the below code snippet and create a file called docker-stack.yml.

This will launch the docker services to the swarm.Run the below command to launch the stack.

To test if the services are fully operational, open the kibana url: http://<instancedomainor_ip>:5601. Login with: Username:elastic, Password: myesPassword.If the Kibana app opens the services are up and we can move on to the next step to launch the Filebeat container and start shipping the logs.To test fully, the steps from Part-1 of the post can be followed.

Filebeat container has to be launched on each of the servers where we want logs monitored.There is a custom image which I have used for the steps below. The image can be found at the Docker hub location which I specified above.Below are the steps to be followed to prepare the config parameters and launch the container.

Now we are ready to test how the whole stack which we deployed works and displays the log data sent from the Filebeat containers.First create a test log file with any of the names which were specified to be monitored in the filebeat.yml file above(e.g access_log, access.log).The log file has to be created at the location which was specified as 1st volume while launching the filebeat container.

Once the log file is saved, we will test if the log data is visible on Kibana App.Follow the below steps to test the logs in Kibana:

If any of the components doesnt seem to work properly or the log data is not visible as expected on Kibana, errors or issues can be checked by checking the logs for each launched Docker container or service. Use the below commands to chec the errors in each of the components:

In this 2-Part series post I went through steps to deploy ELK stack on Docker Swarm and configure the services to receive log data from Filebeat.To use this setup in Production there are some other settings which need to configured but overall the method stays the same.ELK stack is really useful to monitor and analyze logs, to understand how an app is performing. I use ELK stack to monitor many of my application logs in a centralized manner.If any questions then go ahead and create an issue on the Github repo or email me at amlanc@achakladar.com.

Deploy an ELK stack as Docker services to a Docker Swarm on AWS- Part 1 In this 2-part post, I will be walking through a way to deploy the…

Deploy and run a Jupyter Lab server using Docker on AWS Do you know Jupyter? Jupyter is a collection of open-source web based tools which…