A Codepipeline example to deploy a NodejS app on AWS

In this post I will be walking thorugh a simple Codepipeline flow to deploy a NodejS app on EC2.The flow described here is a very simple flow to give a basic demonstartion of how to setup and run a Codepipeline flow.To follow through you will need a basic understanding of CI/CD and some basic AWS understanding. Rest you can follow through step by step to setup your own pipeline.

Codepipeline is a service provided by AWS. It is an AWS managed fully automated Continuous delivery service.Based on the configuration defined, it automates the steps which starts from checking in the code, bulding the code, testing the code and finally deploying the same to Production systems.This full end to end process is handled by Codepipeline and without any manual interventon if configured so.Using this one can automate what tests are ran on the code, how and where the code is deployed and all without manually spinning up any servers like Build servers.

Here I will explain a process about how you can setup a basic Codepipeline flow using a NodeJS app as an example.In this example I havent included any test phase but in actual Production pipelines, a test phase will be a mandatory part.

What will we build

In this example we will setup a pipeline to build and deploy a NodeJS app. The app itself is a simple NodeJS app using Express. The app provides an interface to add products to a MongoDB database and then display the list of products by reading the products from the database.All the dependencies are defined in the package.json file.

Below is the flow which I will be walking through in this post. Lets get to know each phase or step of the flow.Below I will provide a brief explanation of each phase involved and various files /scripts involved in each phase. 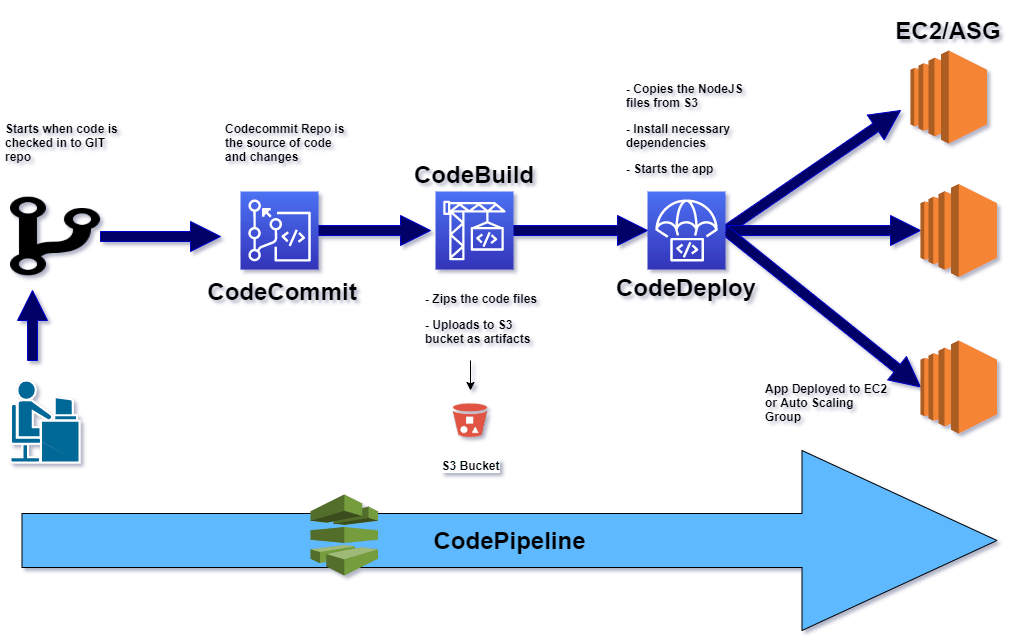 This is the GIT repo where the code will be checked in.This will serve as a starting point of the release process.When code is checked in the repo, it triggers an execution of the pipeline which then follows multiple phases to finally deploy the code to Production.

This step performs a build of the code which was checked in the last step.Also this is the step where we can run various tests on the code to make sure the checked in code works and wont break the overall application.Generally we have a deployment artifact generated in this step which will serve as the package to be deployed in subsequent phases like deploy in stage for testing, deploy to production etc.
In my example I have skipped the testing step but it is always a good practice, in fact a mandatory practice to include test steps in the Build phase to make sure the code changes dont break the system.Below are the tasks which are performed in this example flow. The build details are specified in a file named buildspec.yml in the root directory:

In this phase we will deploy the artifact that was produced by the Codebuild phase, to production.In a proper release pipeline, there can be multiple Code Deploy phases which can handle multiple deployments like deploying to a Test environment for testing, Deploy to stage environment for testing etc.Regardless how many deployment phases you need, the basic steps remain same which I will be going through here.

The definition of the deployment is specified in multiple files and scripts. Let me go through each of them briefly:

Walkthrough of the Setup

Once we are done with the initial steps, next we start setting up the components of the pipeline.

Once asked for credentials, provide the GIT credentials of the IAM user which we created during initial preparations.Once done, commit and push the code to the repository.

Once the pipeline is successfully created in the last step, it should have automatically started running. Wait for the run to finish. If it succeeds the deployment of the NodeJS application is complete. To test, copy one of the instance URLs from the earlier step and launch a browser with this: http://<instance_dns>:3000.If you see this page, the deployment was successful!!!

To re-run the pipeline, just modify something in the code and push another code revision to the CodeCommit repo. This will trigger another run of the pipeline.ALso to manually trigger, just click on Release pipeline button on the Codepipeline page for this pipeline on AWS console.

There can be times when the release pipeline will fail. The phase which fails will be highlighted on the pipeline page. To check what failed, click on the details for that step to check the logs for that phase. The logs will help identify what went wrong in the phase.Fix the issue, re-commit and push a code revision to the repositiory.This will trigger another instance of the pipeline. 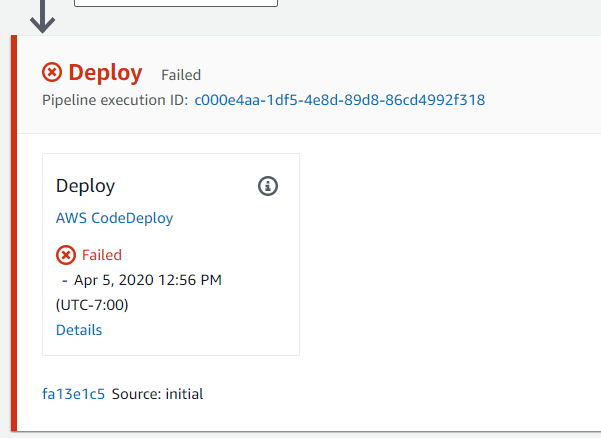 In this long post we went through various steps and actions needed to setup an end to end release pipeline on AWS CodePipeline.This post should help you with a basic understanding a basic pipeline works and setup on Codepipeline. This example is not a production grade pipeline as it misses many mandatory phases like testing, stage deployment etc.Once you understand the basic setup of the pipeline, you can experiment and add more phases to the pipeline to handle complex scenarios.For any questions or issues please reach out to me at amlanc@achakladar.com.